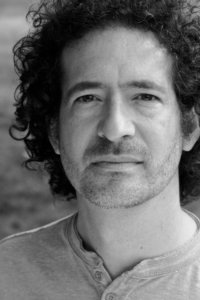 Jim lives in Brooksville, Maine with his wife Jill Day and his two girls, Lucena and Isla.

He is a screenwriter/filmmaker who is attempting to break into the industry from rural, coastal Maine. It’s a surefire plan!!

Jim is a Stowe Story Labs alum and his optioned, modern, feminist, family, animated feature, Igor and Frankie, was in the “Top 10%” in the Nicholl Fellowship and is currently a Top 1% Project on Coverfly. His dark rom-com screenplay, The Cult of Us, was a Quarter-Finalist in the Nicholl Fellowship and is a Coverfly Top 2% Project. His short script, Ninja Chiropractor, was a Semifinalist in the Austin Film Festival screenplay competition, where he also was an Austin 2-time Pitch Finalist.

As for filmmaking, Jim’s 5-time award winning short film, This Time It’s Shopping, made for $100, was selected by 18 film festivals.

This achievement got the attention of Sesame Street, who hired Jim to make a short film about “the number 6” which takes place on a coastal Maine farm. His Sesame Street short can be found here on HBO at minute 19 and it’s adorable.

Jim’s subsequent short film, Passive Aggressive Dads, has since been selected by 22 festivals, including Sedona, Nantucket, Breckenridge, SOHO, and BFI London. The film has also won 3 top awards, including Best Comedy (up against features) at the Beaufort International Film Festival.

His current film, The Mushroom Huntress, which is currently in its festival run, has been selected by Woods Hole Film Festival, Austin Revolution Film Festival, among others.

In 1993, Jim was slated to graduate from UMass Dartmouth with a impossibly-practical combined degree in Philosophy and Electronic Music Production.

Without a clear career path, and some lingering spiritual aspirations, Jim was promptly recruited into a Buddhist, Computer Programming Cult.

You read that right.

And it was run by a white dude named Frederick Lenz, a.k.a. Zen Master Rama.

Clearly, young Jim had not yet been introduced to the term, “red flags.”

After being rescued from the cult from friends and family (I’m all right, by the way), Jim turned to activism speaking out against mind control cults and the grip they have over their followers. Jim was widely featured across national media on the topic.

In 2002 Jim and Jill (pre-children) needed to get away from the noise and rush of the Boston area and purchased 11 acres in Brooksville, Maine, where they designed and built their own house. (i.e. with their own hands)

Since then, Jim has been a Socially-Conscious Web Entrepreneur, run a quaint food Co-op, founded Wise Acre – a widely distributed all-natural frozen treat company (which was wildly successful until it crashed and burned in 2008), and was an Instructional Designer at a local maritime college.

Feel free to get in touch: jimpicariello (at) gmail.com